As I have mentioned in a previous post, KT have decided on whitewashing the original hardwood floors in the living room. 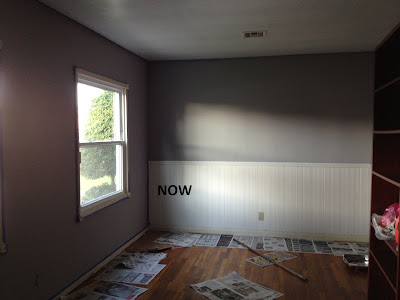 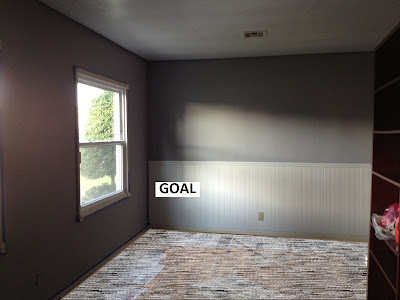 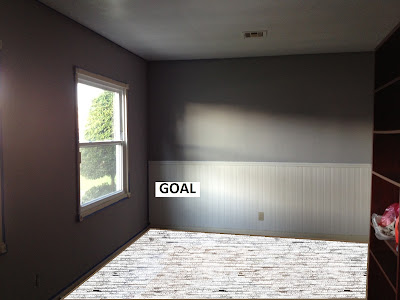 We were hoping that we would find these same hardwood floors in the kitchen under the vinyl floor currently there now.  Instead, we found a plywood subfloor.  It looks as if more sheets of plywood were nailed on top of the subfloor so that the kitchen floor is actually sitting a little higher than the living room floor. 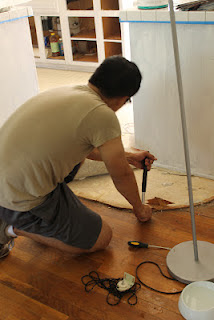 We did not want to put down traditional flooring – hardwood, tiles, laminate, etc.  We wanted something out of the box.  Something creative, and of course, within our $500 per room makeover budget.
KT was wondering if we can pour concrete for the kitchen floor – he was going for the industrial look.  At first I didn’t think it was a good idea because the kitchen is turning out to be more chic and no where near industrial.  But as I considered it some more, I thought it would be a great building block for the finished floor that I realized I wanted – A polished glossy black floor.
Something like this: 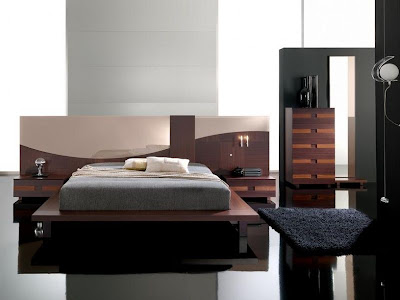 I did some research and found that I can use a high gloss black epoxy sealer on top of the concrete to make it shiny.  I was in love with this idea.  When I pitched it to KT, he was totally on board.

I thought pouring a concrete floor would be fairly simple and inexpensive.  I remembered as a child watching my dad pour the concrete steps/pathway for our house.  He made it seem so easy.  I did more research to find out what it would take to make an interior concrete floor.  There were many people online with similar ideas; however, I soon discovered there were many problems with this project as well.  Most concrete needs to be poured AT LEAST half an inch thick.  I’m not sure if the existing joists in the house will support the weight of the concrete slab.

Also, as I was reading forum discussions, many people said that concrete should not be poured on top of wood because wood moves too much (expand and contract due to heat) and will cause the concrete to crack.  (Our trip to home depot confirms that when we spoke to one of their employees knowledgeable in concrete work).

There were some suggestions online to use decorative overlay instead of concrete.  Overlay can be applied very thinly so we wouldn’t have to be too concern with the weight.  I had tunnel vision for those black glossy floor.  I decided I could piece together all the suggestions online to make something work and was willing to risk the concrete cracking.  We pulled the trigger and headed over to home depot to buy all the supplies we’ll need for my very risky project.  That’s when we discovered that concrete, overlay and underlay, is not so cheap.  On top of that, they didn’t have the self leveling concrete I was looking for.  I had to finally admit that this was a dead end.

We reconsidered the traditional flooring options but nothing came close to what I had in mind – except for the black granite tiles.  Those things cost $5 dollars each tile.  Even for our tiny little kitchen, it would cost twice our budget to put in!  I was feeling a little discouraged and offhandedly said I’m just going to paint the plywood black and make it work somehow.  As I kept saying that, I started thinking that its not such a bad idea.
We went home and I started my research.  Boy, was I surprised to find so many people online doing the same thing!  I especially LOVE LOVE LOVE what Carrie did with her floors over at www.lovelyetc.com. The floor she painted would look perfect in our little kitchen. I’m considering doing something with the same border and a stencil that will match the damask design we’re using for our cabinet liners.  I have to decide soon because we’re starting our floors this coming weekend!