I’m not sure why “Let’s get shaggy with it” automatically popped in my mind when I was thinking about writing a post about our living room rug – other than it being a shaggy rug.  I was racking by brain trying to figure out what the reference was… let’s get …… with it.  Let’s get down with it?  Let’s get jiggy with it?  I’m not good with contemporary references, if you can’t tell.

Moving on… we have been using this setup in our living room: The bottom rug is actually a piece we cut out from the condo when we put in new carpet for our new tenants.  The top rug was a rug we used previously for KT’s music corner at the condo.  Of course both are just temporary for the space.

We first put down the carpet cut-out in the living room because our poor babies were just slipping and sliding around the house.  It was hilarious actually.  I wish I have a video to show you.  At first they were just  slipping as they walked around the house.  I was a little concern that Monster might hurt himself because he’s older now and has joint problems.  But they soon got the hang of walking on slippery floors, or rather – avoiding the floors.  They would jump from their bed, to their blankie, to their memory foam mat, to their pee pad like it’s an obstacle course.  Funny funny babies.   Don’t worry, they are better adjusted now.

Then a few weeks ago, KT came across a sheepskin rug online and thought it looks really good.  Rest assured, being the animal lovers that we are, we would only consider faux sheepskin.  Even faux sheepskin is more expensive than the already expensive shag rug we have in mind.  It was a dilemma so we let it brew on the back burner while we took care of other house items.

Not long after, we were at Pottery Barn and saw that they layered one rug on top of another for their living room display.  We totally dropped the ball on the picture from Pottery Barn.  KT took a picture on his phone and for some reason, it has disappeared .  So I went online to Pottery Barn to see if I can find a picture for you.

We found this picture which is similar to what we saw in the store: 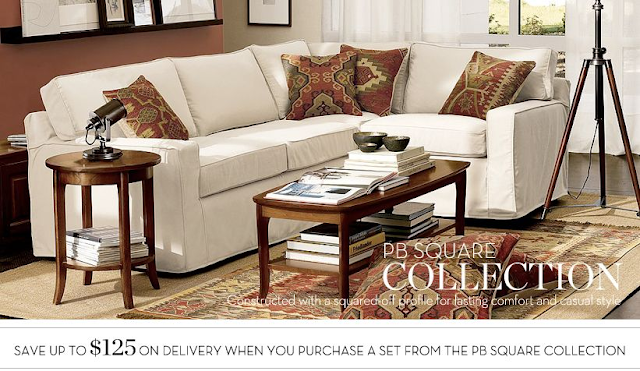 Then I saw this picture, which is really similar to what we have in mind.

We went home after our visit to Pottery Barn and tried the same thing to see how it would look.  We put the Music Corner Rug under the coffee table and on top of the Cut-Out Carpet.  The set up looks like the right scale from the big rug, to the smaller rug, to the coffee table.  If we can find a faux sheepskin like the size of the Music Corner Rug, then it would be more affordable.  We can throw that on top of the bigger rug that would better define the space.  Problem solved.

As KT continued on his search for a rug, he found a ten dollar two by three feet faux sheepskin rug from Ikea online.  We figured if we throw two or three of that underneath the coffee table, then it should work.  We also spotted a five by seven feet grayish beige shag rug at Ikea on our last trip there.  We headed over there last Sunday to try to figure out if we can make it work with those two rugs.

Here’s a picture of the shag rug we have in mind from Ikea: 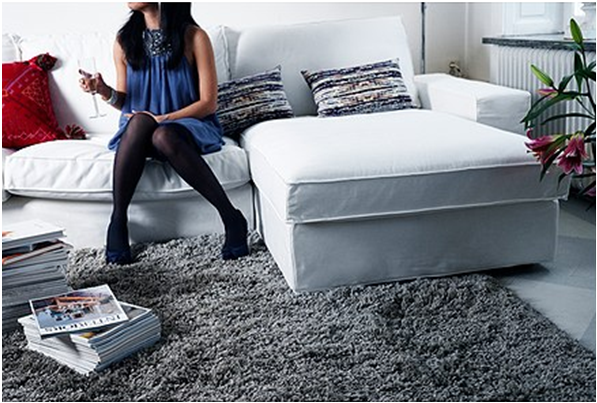 As much as KT wanted a big shag rug and a sheepskin rug, those two together would just be too shaggy.  The faux sheepskin will just blend in with the shag rug.  There just wasn’t enough contrast.  To keep the sheepskin rug, we would have to throw that on top of a low pile rug or a tightly weaved rug.  But in the end, we decided on the shag rug for the living room and will used the sheepskin in another area.

We were going to take off with the two hundred dollars five by seven feet rug but on the way out, we saw a three by three feet shag area rug on sale for twenty dollars.  We stared at it for a while and decided that we can throw six of these together to make a six by nine area rug for only $120.  The high pile fibers will also hide the seam so it shouldn’t be too noticeable that our rug came in six pieces.  So we swapped out the rugs and went home.

I was celebrating our new rug solution (while KT attended to his day job) when Susan coincidentally sent me a link to a shag rug sale on Groupon!  So what do you know… after all that hard work, we bought the rug off of Groupon.  o_O 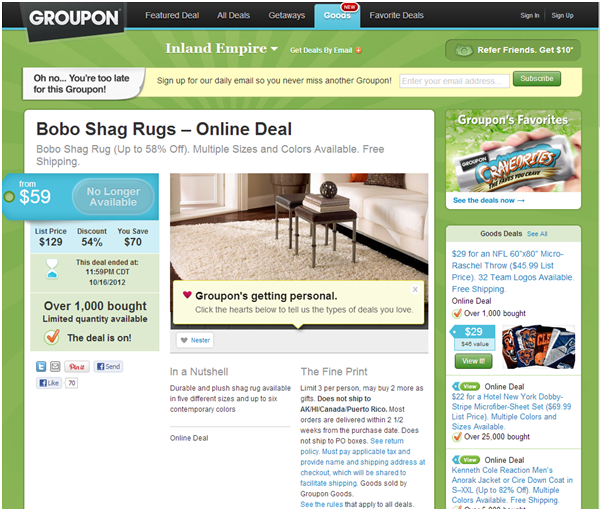 It is eight by ten feet (we just keep going larger and larger) for two hundred dollars (free shipping!).  We went with white.  Can’t wait until it is delivered.

Now, we just have to return these six rolls of rug. 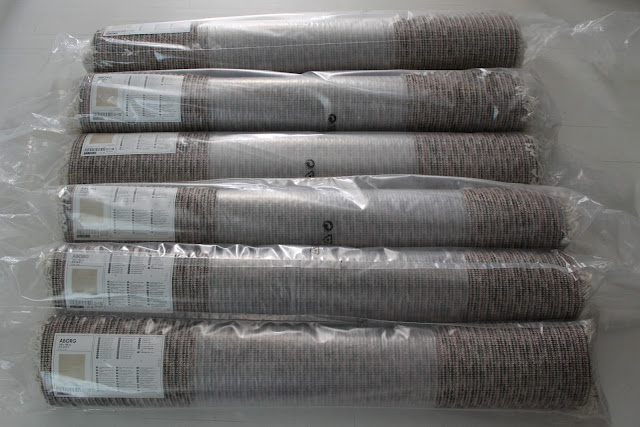 Enjoying the hammock this morning 🌄 And... I ga